In 2015, Guala Closures began its commitment to a three-year reforestation project in Colombia, devised and coordinated by Up2green Reforestation – a French NGO.

This project, which was 100% funded by Guala Closures, has three objectives:

The first part of the project began in 2015 in the Amazon, where 10,000 trees were planted in the native communities of San José del Rio and San Martin de Amacayacu.

The second phase took place in 2016 and 2017 near Ipiales in the Andes where 100,000 trees (more than expected) have been planted. This area was chosen because at an altitude of 3,000 meters, the lack of trees creates drastic problems in water retention, causing serious consequences to local agriculture.

The project was developed by Up2green Reforestation and includes direct collaboration with the local population in order to identify the community’s main needs. More than 350 local families have been involved in working on the project during the three-year period.

15,000 tonnes of carbon dioxide will be offset

Work and income for more than 350 families

Benefits on biodiversity, and local ecosystems 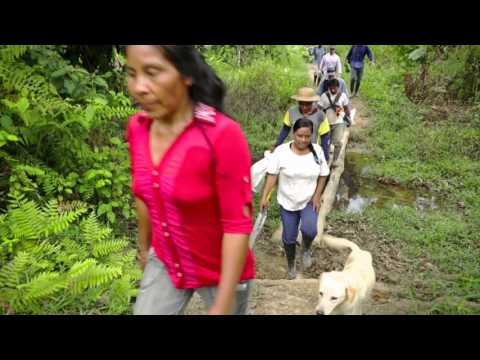